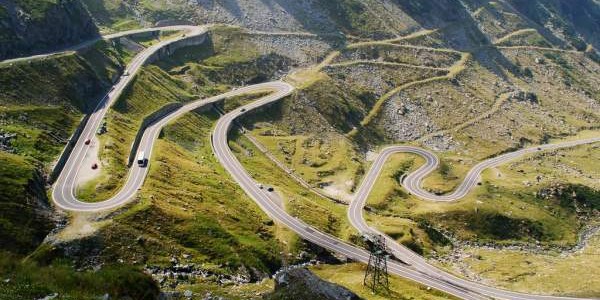 Romania’s national roads network cannot rival the US Interstate Highway system but the Transfagarasan and TransAlpina, two unique thoroughfares over the southern Carpathian Mountains are part of any list of the world’s most amazing roads. Also labeled “the Road to the Sky”, “the Road to the Clouds”, “the Best Driving Road in the World” and even “A spectacular Monument to Earth-Moving Megalomania” the TransFagarasan climbs, twists and descends right through Moldoveanu and Negoiu – the highest peaks in Fagaras Mountains and in Romania. This is no pass through a gap but a frontal assault, a stark and spectacular reminder of unchecked power stamping itself on an obstreperous landscape. Also known as the “Transylvanian Alps”, the Fagaras Mountains are rich in unique wildlife and scenic hiking and biking trails. [read more=”Read more” less=”Read less”] Built for military purposes at the initiative of Romania’s last communist leader Nicolae Ceausescu, this dynamite-forged road connects two of Romania’s historic provinces Transylvania (the Center) and Walachia (the South) through a series of five tunnels, 27 viaducts and 831 small bridges. The TransFagarasan ranges in elevation from 1,630 feet at Cartisoara to almost 6,700 feet at Balea Lac. The road is below the tree line until about 5,000 ft. and then it opens up and reveals itself. Although it is the best-known scenic drive in Romania, because there are faster roadways that connect southern and central Romania, the Transfagarasan is still relatively unperturbed by the motoring masses.